Did you know that people have been creating and imitating flowers for as long as we’ve had the thought to do so? Artificial florals, or silk flowers as they’re more commonly referred to, attempt to replicate your favourite blooms. Chances are you’ve been duped by silk flowers posing as real ones and never noticed. Only a detail-obsessed zealous flower enthusiast would be caught scaling hotel staircases to see if that orchid perched along the high window ledge is one of nature’s own.

Once considered inferior, silk flowers remain popular because of their longevity and are often chosen when it is too warm for fresh flowers or in times where a less fussy floral is needed. They don’t have the same demands as fresh flowers making them a good choice if you need a permanent botanical that’s low maintenance to fill a space where it has a high probability of being knocked over. Artificial flowers are often chosen for weddings as brides opt for a keepsake bouquet and boutonnieres to remember the occasion by. Hotels, companies, festivals and funerals all use artificial flowers, often acquiring a basic selection of faux flowers to use in combination with fresh. Silk florals can be left in place and dressed up accordingly. If stored correctly, they will look as crisp as they did on the day they were purchased. Some even come with artificial dewdrops that glint all year round, even when it’s cloudy.

So, where did the need to create flowers out of other material come from?  Floral forgeries date back as far as the Ancient Egyptians and Chinese of the old worlds who shaped statues and designs from stone and wood, some of which are decorated with floral patterns. In Alexandria, in Egypt for example, the stone Head of Serapis was found with a crown embellished in leaves. In the last century at the same temple, two stonewall carvings were discovered estimated to be over 4,000 years old. One portrays a goddess surrounded by a wealth of flowers.

The trend was soon picked up by the Romans who are known for their floral crowns worn at games and royal events. The Italians created their faux florals using silkworm cocoons and the French took it further with high-grade silk making them an imminent rival. Flower artisans soon took the trade to England and it eventually spread to the USA through immigration. At the beginning of the 20th century, many different materials and designs were used to create what we now know as the ‘silk flower’. In Ireland, crafting artificial flowers from paper are traditionally made by Irish Traveler women and are an important feature of their culture. In the past, they’d sell and trade their colourful florals as they travelled throughout the country or offered them as tributes and gifts to family and friends.

Commercial silk flowers are usually hand-crafted from pre-cut materials which are then pressed in a mould to give each petal its distinctive shape, be it veiny, smooth or textured. If the mould is not available, then the flower is constructed from scratch. The time it takes to make each flower can vary from the complexities of the design to the speed of its creator. Depending on the quality of craftsmanship, you can expect to pay more than double than its natural form. However, it’s meant to last forever. There are numerous materials available to the artist. The most common is polyester, however, we see artificial flowers made from silk, foam, glass, paper, plastic, wax and even human hair. Your local florist can advise you what artificials are available to best suit your needs, although don't expect them to have florals made out of hair!

Today's silk flowers can be remarkably real with some possessing a fragrance. Good quality stems of large-headed hydrangeas, tulips or lilac blended with artificial grasses can evoke the same impression as a real bunch and the best part is that you don’t have to change the water. Fabricated trees and lawns are growing familiar and are more manageable than its organic counterpart. One accustomed to handling flowers might find that weak imitations are easy to spot. Glue, colour and material will give the game away, as well as dust.

Another category of florals that occupies that liminal space between mother nature’s creations and man’s imitations are preserved flowers. If you want real flowers with artificial qualities, then check out A Room In Bloom’s ‘Always In Bloom’ collection of preserved flowers. Don’t discriminate and limit your arrangements to one variety of florals. Enhance your botanicals by mixing silk, real and preserved, so you can have those precious dainty blooms in season all year round. 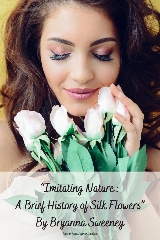